Skip to content
“Momma Was A BAD Mutha…Shut Yo Mouth” 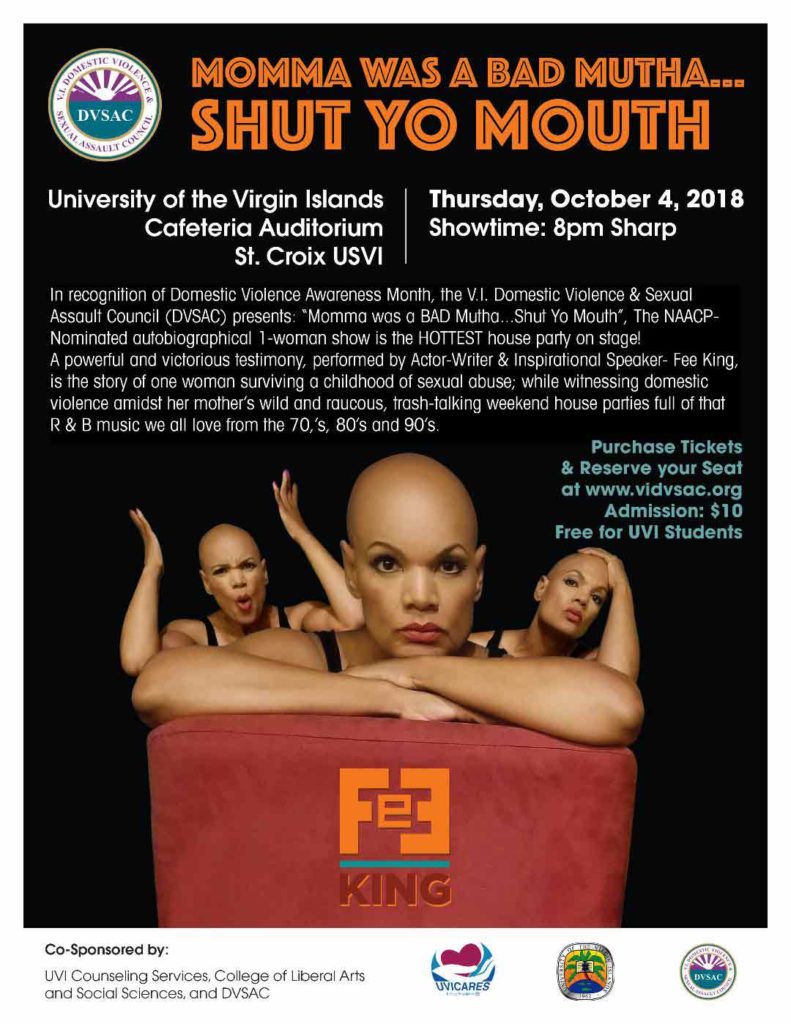 Break the Cycle: Healthy Me, Healthy We! A journey of self-love, strength, and a willingness to live one’s best life. Fee King’s NAACP Theater Awarded, 1-Woman Play, Momma was a Bad Mutha…Shut Yo Mouth.   Considering the increasing number of cases of sexual assault, rape, misappropriation, and handling of young people; along with the challenges experienced between mother and daughter relationships, as well as the challenges that teenagers face navigating this new culture – “Momma Was A BAD Mutha…Shut Yo Mouth, reinforces, using Fee’s story of “Surviving her Childhood”, that “you are good enough and that you are ALWAYS worthy of a love that builds you up – especially love from yourself”

It’s the HOTTEST House Party on Stage!  A movin’, groovin’ house party deep in the sticks of Omaha, Nebraska becomes the backdrop of this universal story of a young girl’s untimely coming of age amidst her mother’s wild weekend house parties. From the countless bid whist card games to the local veterinarian posing as the family pediatrician, there’s always something sinister going on at Momma’s house—and it’s always happening to the old school R&B Jams of the late ’70s & early ’80s. It’s the HOTTEST House Party on Stage!

This compelling, provocative and richly told autobiographical 1-woman show titled, Momma, Was A BAD Mutha…Shut Yo Mouth, is written and performed by the award-winning actor, writer, and producer, Fylicia “Fee” Renee King and directed by Sammie Wayne V.  Her story is everyone’s story, who has survived sexual abuse, the witness of domestic abuse and the turbulence that comes with life when raised by a single mother, who did the best she could with what she knew. Fee King skillfully weaves eighteen (18) superbly written, “hilariously dysfunctional, and sometimes dark characters” (Omaha Star Review, 2007) from her past to reveal the juxtaposition and oxymorons of family dynamics and the influences in one’s environment. This tragic, yet triumphant,… raw yet racious,… the real-life tale takes places in Omaha, Nebraska over the course of roughly 30+ years.